Francis I and the lure of Italy

The fur trade is a part of our heritage to the same degree that the calculated destruction of native Americans is a part of our heritage. Historians commonly lump the fur trade of the 16th century with the fisheries, as if the relatively meagre shipments of fur from North America were as important economically to Europeans as the tons of fish caught off the coasts and in the bays of North America and shipped back to Spain, France and Britain. Even as a luxury trade, fur amounted to very little in the 16th century simply because fur was not that important to the culture of the 16th century.

European history and American history are generally taught separately and seldom are the timelines in each analyzed together. Yet when it finally dawned on me that 1492 is more or less in the middle of the most glittering period on the European timeline, the Renaissance, the boredom with which the French and British greeted the discovery of the Western Hemisphere became understandable. The Renaissance was a rediscovery of the Classical culture, and how much discovery could a culture bear?

Francis was born in 1494, two years after the discovery of the New World. But the ongoing tales from the New World played no part in his education. By the time he succeeded his second cousin Louis XII, marrying Louis's hunchbacked daughter Claude, the Duchess of Brittany, to smooth the way, he was devoted to bringing the ferment of the Italian Renaissance to France. His mother Louise of Savoy admired Italian artists. Soon after gaining the throne Francis invited Leonardo Da Vinci to his court though Titian is the most notable artist to leave us his portrait. 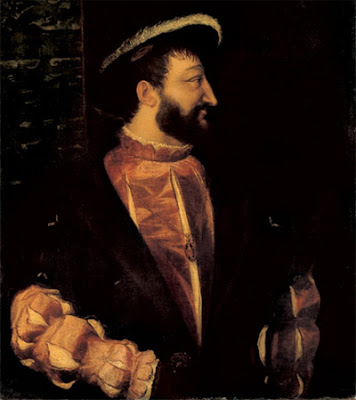 Yes, the outfit Francis is wearing makes it look like he is indeed a man who appreciates fur. But Titian never saw Francis in person. One source says he based his portrait on a medallion made by Cellini, who lived with Francis for a few years, and another source speculates that Francis had one of his outfits shipped to him. As I'll explore in other posts, artists who could pull it off depicted fur to show off their skill. Unconstrained by the man in the flesh, how could Titian resist giving Francis's coat a generous fur collar? Didn't Francis live in the chilly north? There is one portrait of Francis done from life, and Clouet has the King looking like an Italian dandy. 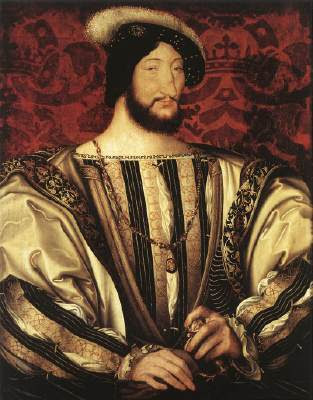 Francis's importation of Italian and Classical art won him his spurs as a Renaissance Man, and it meshed nicely, in his own mind, with the on-going obsession of French monarchs with the conquest of Italy. Italy was the portal through which the wonders of the Classical world were rediscovered. Francis did patronize the voyage of the Italian sea captain Verrazzano to the New World, but when that worthy made his landfall in America, Francis was the prisoner of Charles Fifth of Spain as a result of his attempt to conquor Milan. According to a papal nuncio who saw him during his imprisonment, Francis always wore a beige coat trimmed in inexpensive fur, which is to say, fur was not really his style.

To be sure historian and biographers, anticipating what was to come, try to plant the seeds of European fascination with the New World as early as possible. That's a hard sell with Francis. His best recent biographer, R. J. Knecht, writes: "Unfortunately for Verrazzano, his return coincided with Bourbon's invasion of Provence. Francis had already left Blois to take charge of his army in the south. He may not have found time to read Verrazzano's report or to meet him in Lyons in August, yet the explorer was commissioned by him about this time to undertake another voyage to the Indies. He was given four ships, but just as they were about to sail, they were requisitioned to help defend the French Channel coasts." The Bourbon invasion was a ramification of the Italian wars, which inevitably touched off fighting with the ancient enemy across the Channel.

Verrazzano, I think, understood his patron. He mentions the native animals of the New World but not to fuel trade in fur and skins. He assured the king that there would be good sport hunting animals: "There is an abundance of animals, stags, deer, hares; and also of lakes and pools of running water with various types of birds, perfect for all the delights and pleasures of the hunt.” Francis had a passion not just for the chase, but for the gore. In 1520 Richard Wingfield sent an account of one of Francis's hunts to Henry VIII, adding "then the king himself, after their fashion, cut off the right foot of said boar..." In 1539 the Bishop of Saluzzo wrote of Francis's court, "Here one thinks only of hunting... One hunts stags twice a day, sometimes more often; and with nets once, then one moves onto another lodging." The court of France was peripatetic, not the least to avoid being in Paris too long which only invited challenges to royal authority. So a huge retinue followed the King, Francis made it huger still by raising the number of huntsmen attached to his court. He also increased the size of what amounted to his harem. When he was riddled with syphlis, he had his lackies carry him on a litter so he could shoot stags.

Francis's interest in animals didn't seem to extend beyond blood sport and into the world of fashion. The sense of animals that Francis and other nobles had was closer to Medieval Bestiaries than to Venus in Furs. Wealth required the explication of one's background and standing, which required symbolism both in heraldry and display. Francis chose the salamander, something he never "chased", and emblazoned it on his ceremonial talismans with the motto Nutrisco et extinguo, so to say, nourish the good and extinguish the bad. The salamanders in stone are all over his castle at Chambord, built originally as a hunting lodge. 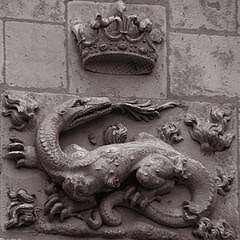 Of course, he never wore a salamander. But Queen Claude had the ermine as her emblem. In France, the ermine was probably most common in Brittany, of which Claude was duchess. So in the castle's bedrooms, the salamander of Francis was paired with the ermine of Claude. 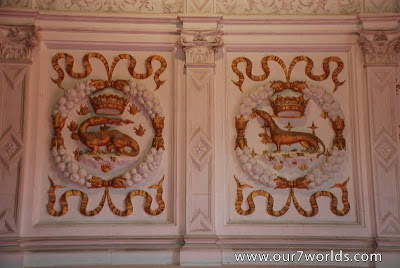 In depicting Francis artists found that salamanders seldom served. So in one mantle piece, Francis wears blue robes decorated with gold fleur-de-lys and an ermine collar. While England had the Knights of the Garter, France had the Order of the Ermine with the motto "potius mori, quam faedari" so much to say "better dead than sullied." This motto had its roots in the Classical belief that the ermine "would prefer death over the possibility dirtying its coat by crossing a marsh." Not surprisingly with that motto, the ermine became the emblem of many noble women, and women were allowed in the Order of the Ermine. The legend of the ermine has also been linked to the medieval cult of the Virgin Mary and belief in the Immaculate Conception. (Today the Order of the Ermine is a medal given to those defending Breton culture from Parisian bureaucrats. My sister-in-love, who founded the American branch of the International Committee for the Defense of the Breton Language, was awarded one several years ago.)

Leonardo da Vinci painted a young Italian not wearing an ermine but holding a live one. 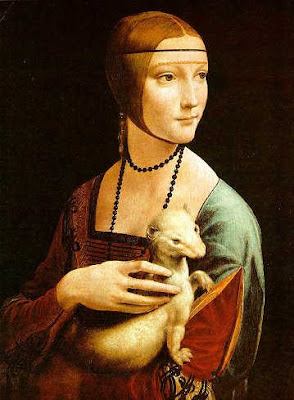 This was not, I think, an effort on his part to correct myth by depicting nature. Leonardo loved Bestiaries. In his own he wrote: "MODERATION The ermine our of moderation never eats but once a day, and it would rather let itself be captured by hunters than take refuge in a dirty lair, in order not to stain its purity." Here is a thought likely to placate any beauty squeamish about having an animal sacrificed for her wardrobe.

Francis seemed to have no interest in Beastiaries, and if he was in the Order of the Ermine, there's no evidence that it meant anything to him. He certainly didn't hunt ermine as easy as Leonardo made that enterprise out to be. Because of the interest of the nobility, the ermine was highly prized, much more valuable than beaver pelts. It rivalled the Russian sable and indeed ermines imported into France came from the northeast, not the New World.

Ten years ago, from the day I am writing this, I took advantage of an early winter thaw to see if beavers would be out in what I called Beaver Point Pond to take advatage of the warmth. As I walked up to the dam of Otter Hole Pond which spread out above Beaver Point Pond, I saw an ermine only because it was so conspicuous since all the snow had melted. In the video I took at the 15th and 30th second there are two brief glimpses of the white dashing ermine running through the tumble of logs and sticks below the dam.

How stange those Medieval and Renaissance conceits about the ermine seem. How easy to see in that video that in its own habitat the ermine would never be sullied. It might not be so lucky when its pelt adorned the ladies of Francis's courts.

By virtue of being King, Francis sponsored all the sporadic efforts to explore the New World undertaken during his reign. Verrazzano disappeared on subsequent voyages, supposed eaten by cannibals. Jacques Cartier, a Breton sailor, inspired by the reports of fishermen, organized voyages to explore the land mass just west of those fertile fishing grounds.

(to be continued)
Posted by Bob Arnebeck at 8:08 AM