I asked my brother who is seven years older than me, if he recalled when our mother got her mink, and when she first began talking about wanting a mink coat. "I didn't know she had one," was all I got out of my effort to corroborate memories. So what does my remembering mean? Killing animals, skinning them and wrapping their fur around your body is not a primal urge. If it were, my brother would have remembered. Wanting a mink coat is a desire constructed by civilization and everyone involved in the fur trade then and now consciously confronted the necessity of killing animals in order to attain the comforts or benefits of fur. Everyone had a mother or mothering influence in their early life. But it seems seeing ones mother wrap the remains of a dead animal around her body makes an impression only on some children.

Granted, I am thinking about my first impression of fur a bit too much of late. Indeed, for years I didn't associate the song I sang to my mother, My Skin Your Skin, just those words repeated in sweet falsetto until told to stop, with her desire for a mink. I thought it expressed my desire for her skin. But if words mean anything, the song clearly expresses a separation between her skin and mine. But why do I think now that, when I was four or five years old, my drawing a distinction between her skin and my skin had anything to do with her desire for a mink? 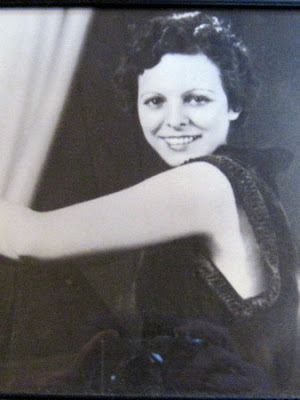 ended in 1934 after she didn’t make it in New York City. She married a handsome federal government bureaucrat and their third son, me, was born in 1947. She tried to keep her old showbiz dreams alive with song writing, and sending her songs to old show biz contacts. Julius LaRosa sang my mother’s song, “Spring Again,” on the Arthur Godfrey television show. In the 30's she sang frequently on Godfrey's radio show when it came out of Washington. A New York music publisher offered her $10,000 for "Spring Again." (Here's a link to her singing the song from a record she produced, and paid for, at a local recording studio Spring Again)

Much depended on Spring Again. I think it was then that she expressed her pent up desires to have a house, a Cadillac, and a mink coat. I easily grasped her first yearning. There was a steady progression of tenants from the Falkland Apartments to new houses in suburbs farther away from the city. (Falkland was right on the "District Line," the boundary between the District of Columbia and Maryland.) I lost friends because of that progression. Frankly, given all the Fords, Chevies and Plymouths I counted, I thought a Cadillac impossible, and hoped at most for a Buick.

But why did I take her desire for a mink coat so personally? There was no pleasure in it for me. I'm sure my two older brothers told me how mink coats were made. Did I become jealous of a mink coat, or fascinated by it? It was clear to us all that she wanted the mink for the glamour. Thanks to her nightclub career she was no stranger to glamour, and judging from the movies of the period, fur was a mainstay of female showing off in the 30's and remained so in the 50's. However, she always told me she wanted it for the warmth.

My mother did not sell her song. Another recently published song used the phrase "Spring again." But my father's career went well. We moved to a new house in late 1954 and we got a used 1954 Cadillac (rounded fins) in the summer of 1957. Between those two dreams-come-true, my mother got her mink, not a coat, but a mink jacket, which she always called a "stoll."

The photo below shows that she had her jacket prior to January 1957 and it is most likely that she got it for Christmas 1956. 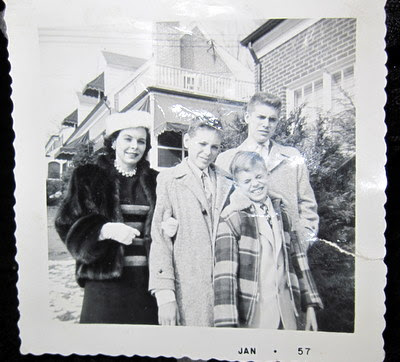 She was flanked by her sons. I am the smallest, 9 years old, my brothers 16 and 12. I recall seeing a series of photos of her posing with her mink alone, but another photo is more suggestive. Below my mother in her mink posed with her second son, then 17 years old and me, 14. 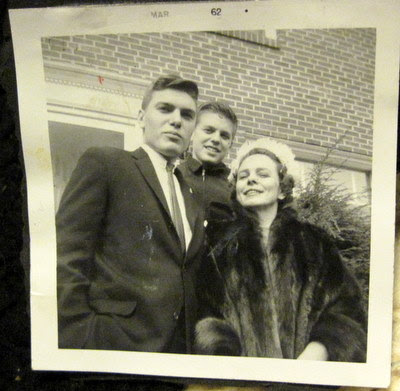 Much happened to me in that 5 years, can't you see it in my face? More or less the same that happens to every boy between the ages of 9 to 15, though my rite of passage was far different than my brother's. He had girlfriends throughout puberty and more pursuing him. I had none and suffered through every date I had, though not as much as the poor girl stuck with me. As the photos show, my brother gravitated to that mink and mother wanted him next to her in her moments of glamour. Easy to see why. I haven't asked that brother about his memories of the mink jacket (he may still have it in storage,) but I remember that one Halloween he dressed up as a woman. He must have been about 13, and was stunning. There was a family discussion about whether he should wear the mink. I don't think my mother was amused, and, as I recall, he didn't. Perhaps I do not make much of an impression in the photo above, but by that time I had worn the mink, several times.

Thanks to my disinclination to go out on dates, it was not uncommon for me to be alone in the house on Saturday night. On dark winter nights I would go into our backyard naked except for my mother's mink jacket. I told myself that I was testing to see if my mother's claims about its warmth were true. I fancied myself a scientist. Well, not warm enough to keep me from soon going back inside.

I've thought about this a great deal, and I don't think that my suburban romps foreshadowed the warmth I felt on those rare days some 40 years later, when I saw a mink go about its business on the snow and ice of Wellesley Island swamps. Warmth comes from motion, not posing, at least if you follow the mink. Tracking an animal in the snow, the last thing you want is to be burdened by fur.

And I'm not sure the mink jacket warmed my mother. Winters were always cold to her but the mink was banished even before my parents moved to Florida. I'm not sure exactly why but while she continued to love her house, and Cadillacs, she stopped wearing the mink jacket. My father was from Minnesota, the son of a Scandinavian family which, if old photos can be believed, had an entirely different sense of fur. To them it was an accessory, well, more than that, a punctuation to fashion, not an attempt at enveloping glamour. 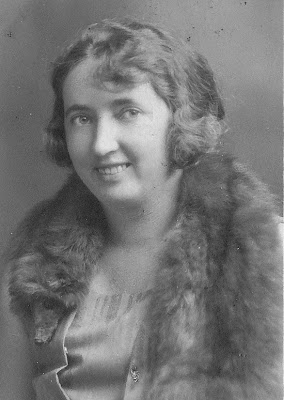 The photo is of one of my grandmother's cousins. I never saw my grandmother with such a wrap. My father's parents were never rich and even had to ship him, the youngest of three, off to live with an aunt in Oklahoma City during the Depression. When that aunt died in the 1980's she bequeathed all her belongings to her favorite nephew, my father. Among the items were two small furs, weasels, heads and tails. (I found them in our house on Wellesley Island, and sent them to my two brothers as a joke.)

I have no reason to believe that my father had anything against my mother's mink jacket. But even a hint from him could crush her. Did he mention his aunt's furs? Did my mother finally see the heads of the animals she was wearing? All I know is that she stopped wearing her mink.
Posted by Bob Arnebeck at 5:00 AM