Peter Kalm and trees falling in the night

In the standard histories, the land is always "rich in furs", then trapped out, and the trappers and traders move west to find land "rich in furs." So what are we to make of this June 29, 1750, diary entry made during a trip by canoe from Albany to Montreal along a trail that had been a major fur trading route for over one hundred years and in that area where the so-called "Beaver Wars" began in the second half of 17th century between eastern tribes vying for access to beavers far to the west because beavers in the wilderness between Albany and Montreal could not be found?

"As we came lower down the river, the dams, which the beavers had made in it, produced new difficulties. These laborious animals had carried together all sorts of boughs and branches and placed them across the river, putting mud and clay in betwixt them to stop the water. They had bit off the ends of the branches as neatly as if they had been chopped off with a hatchet."

At least a few beavers survived that first one hundred years of persecution.

The observation was not made by a trapper, but a Swedish naturalist, a student of Linneus, sent by the Swedish Royal Academy, to find plants in North America that might be useful in Sweden. Peter Kalm did a good deal more. Not only plants fascinated him, he found a wife in Pennsylvania, and seemed to record every story he heard about the antics of snakes. He spent his first months in Pennsylvania, then the center of Swedish settlements in North America, where he saw no beavers but did see the "beaver tree," which we now call the sweet bay tree. He was told that tree was the beavers' favorite and that traps baited with limbs of the "beaver tree" never failed catching a beaver.

He did not learn much about beavers in Pennsylvania: "Beavers were formerly abundant in New Sweden, as all the old Swedes here told me. At that time they say one dam after another raised in the rivers and brooks by beavers. But after the Europeans had come over in such great numbers and cultivated the country more, many beavers had been killed. Many, too, had just died our and some had moved further into the country, where the people were not so numerous. Therefore there is but a single place in Pennsylvania where beavers are to be seen."

No one told him where that one place was, though some folks did assure him that beavers ate fish and could be trained to catch them. So a dozen miles or so north of Albany on his way to Montreal was where Kalm first saw what North American beavers could do. I'm inclined to think that a botanist's first exposure to the works of a beaver must be startling. I've studying beavers for 14 years and I am still startled. Look at this work on a hemlock that I saw on June 28, 2009: 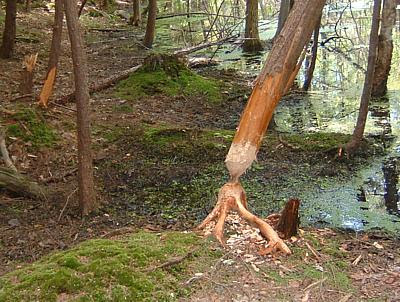 That he saw such fresh work on a dam, with mud and the teeth marks evidently still fresh, in late June, is interesting in itself. This was not a dam left by beavers killed long ago or during last winter's hunt. There's a special vibrancy to a dam that is being tended. 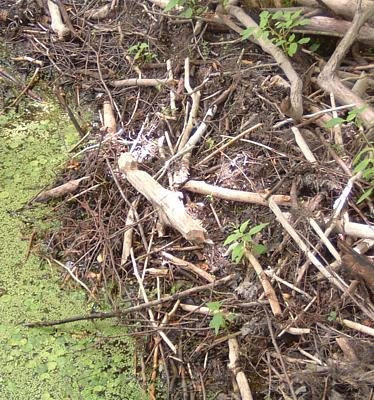 What a pity that Kalm didn't stay to see the beavers come to the dam. But, facing constraints in time and food, 17th and 18th travellers, even natural historians, did not tarry. Kalm didn't catalogue the trees the beavers used to make their dam, nor follow the trails beavers made on the banks of the river to see what trees they cut down. Twice in his diary he remarked about trees falling mysteriously in the night and wondered if roosting passenger pigeons or the humidity caused that. That beavers might have cut trees down never crossed his mind. Kalm hurried on to Montreal and the video clip below shows what he might have missed seeing:

Since this was the only direct observation that Kalm had of beaver work during a journey that took him from Pennsylvania to Quebec, it could be taken as evidence of the paucity of beavers. But this leg of his journey between Albany and Lake George was the only time he confronted a semblance of wilderness. Leaving what was then called Fort St. Frederic, now called Crown Point, the southern end of Lake Champlain, Kalm recorded on October 15 that the Indians there still had an eye out for beavers: "...At this season the natives were busy hunting deer, but at the same time they took pains to see if they could discover any beaver dams, and if they found such they cut their mark into them. When a native comes to such a place and discovers that another has cut into it before him, he does not touch it nor does he go there later to shoot the beavers, but he considers it as a place that belongs to another which he is not supposed to touch."

Farther along he skirted what were called "sunken lands," tractless swamps and marshes. If beavers were flourishing along the better traveled woods in 1750, many more probably thrived in the "sunken lands." I am not going to include a map or an aerial photograph of the terrain today, which are so readily available, because maps and aerial photographs hurry us over the land and miss the trackless point of America in 1750. Here is a photo of some sunken lands near me in September 2006. 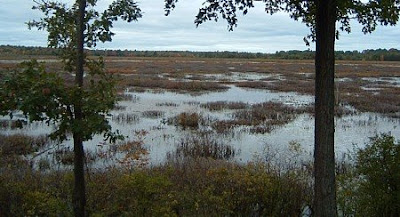 Kalm was well aware of the fur trade and described its importance to Albany and Montreal. He didn't see beavers in Canada, nor did he go out of his way to look for them. He wrote: "It is said that beavers and other animals, whose skins are sent to France, were formerly very numerous in the neighborhood of Montreal and the populated places in Canada. Now they have about disappeared there and it is necessary to travel far to shoot or bargain for them, and in the future it will be necessary to go farther."

How could he resist what was repeated then and continues to be repeated over and again: the land was rich in furs, the beavers were all killed and men headed west to lands rich in furs. At least Kalm left us evidence of beavers left behind.
Posted by Bob Arnebeck at 10:56 AM