I visited the Fur Trade Museum in Lachine, Quebec, at the up river edge of Montreal. The historical core of the exhibit is a mixture of portraits, maps, tables and generous examples of dressed furs and beaver felt hats. There was one mounted beaver, a juvenile with summer fur, just the kind not prized by the fur trade. 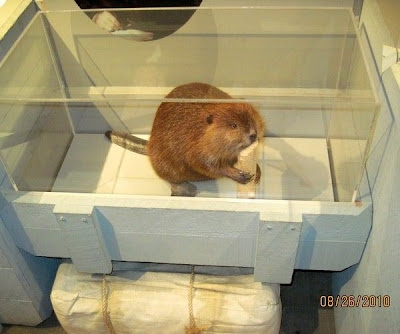 Then there were several large, strangely dressed, plush beavers, with exaggerated white incisors, placed on pedestals or barrels around the displays to serve as "guides" to the exhibit. 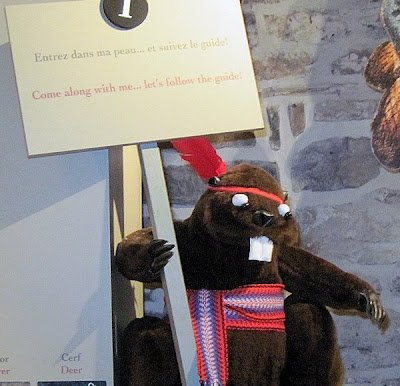 There were also exaggerated plush human figures including a French Canadian "habitant" carrying a pack of beaver skins, dressed a bit like that first plush beaver. 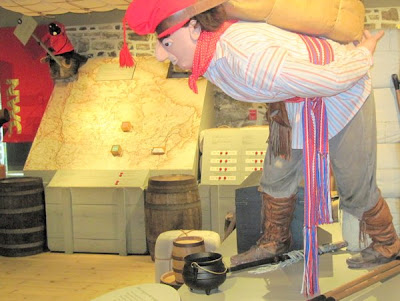 and two merchants fighting over a beaver skin. 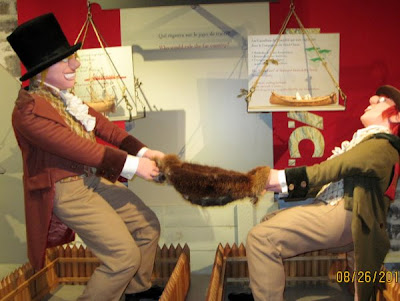 A plush beaver nearby, dressed a bit like a merchant, held a placard saying: "Merger or no merger, they are still after my hide!" 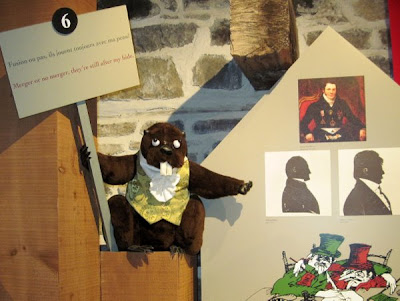 Museums in Quebec have a different style, a flare that is often lacking in American and other Canadian museums, but I thought this went too far and I challenged the attendant, asking him if his museum was "serious." He explained that the museum's prime audience was school children and that the exhibit has not been changed since the mid-80's, implying that back then there was an antic streak in the design of Quebec museum displays.

The conference itself wasn't held in this rather small warehouse which indeed is a faithful renovation of the principal depot for furs coming down the St. Lawrence and Ottawa rivers. 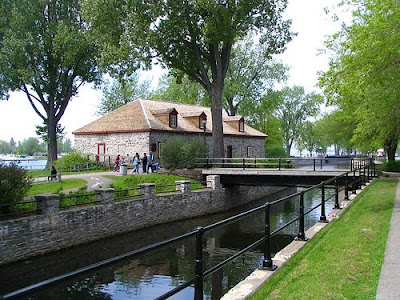 Usually every Scottish name you bump into in Montreal, like McGill University or the McCord Museum, is associated with the fur trade. But those downtown institutions didn't host the conference. It was held at the Lake Saint Louis Historical Society which is a bit up river from Lachine. A tourist in Montreal proper can get an impression that the city has scant interest in the fur trade even though English speaking North Americans think the fur trade was the sole basis for the establishment and growth of Montreal.

That all the great names in the city from the fur trade are of English speakers probably lessens the interest of the modern francophone establishment in Montreal for any celebration of the fur trade. The French names associated with the trade are connected in many other ways to the growth of the city. And as I learned from reading the proceedings of the conference at Lac Saint Louis, the principal historian of the Montreal economy prior to the British takeover in 1763, Louise Dechene, contended in a 1974 book published in Paris, that the fur trade was of marginal importance for the growth of Montreal.

For English Canadians the fur trade is the first thread that links their country together from sea to sea. To be sure French Canadians served the English in all their fur trade exploits from sea to sea, but before 1763, the thrust of French colonization was through the Great Lakes and then down the Mississippi to the Gulf of Mexico. So why shouldn't Montreal have a bit of plush fun at the expense of the dignity of a trade that made a lot of British merchants in Montreal rich?

While the plush figures at the Lachine Museum have fun at the expense of beavers, French Canadians and English merchants, the plush figures of Indians are imbued with as much dignity as plush figures can convey. An Indian man stands with more dead animals in hand, and an Indian woman dresses fur at his feet. The Indians are dressed as if they live in the arctic, even though furs from that region never came through Lachine. 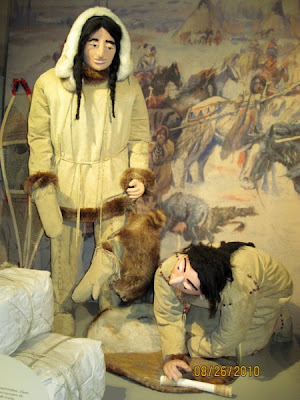 But that's quibbling. Who's to say that in the course of the unprecedented slaughter of millions of animals that there were not domestic scenes like this. But why were the Indians the only plush figures accorded some respect?

In his introduction to the published proceedings of the 1984 scholarly fur trade conference held near the museum, the late Bruce Trigger, a highly respected Canadian anthropologist, alluded to a memorable program in which conference participants joined the aboriginals living near Montreal, Mohawks of the Kahnawake reserve along the south shore of the St.Lawrence. Trigger didn't go into detail, but left the impression that the Indians insisted in no uncertain terms that they wanted aboriginal participation in the fur trade addressed respectfully.

When I moved to the St. Lawrence River valley in 1994 and began watching beavers, I sought the guidance of the local state wildlife biologists who gave me a recently published study about beavers along the river. It didn't give me much information about beavers but it did provide a long analysis of what "stakeholders" along the river thought about beavers based on opinion surveys of the stakeholders. As I recall, farmers, foresters, transportation officials, homeowners, and hikers were considered to have a stake in the management of beavers. As I've been learning ever since, beavers are not stakeholders in this debate. The fur trade exhibit at Lachine reminded me that there are stakeholders in history.

Judging from this display Montreal and Quebec have more or less given up their stake in fur trade history, as have the families of the great Scottish fur merchants. But not the Indians. So there is something to be learned in this visual burlesque of the fur trade. A cursory view of the centuries of the trade suggest that the decline and disappearance of most Indian tribes in North America was tied to their participation in the fur trade, and one would think that Indians, of all people, would want to forget it. Of course, I have no idea if Indians influenced how they are displayed in the museum. More likely an anthropologist sensitive to the feelings of Indians made sure that a big nosed, slack jawed half naked brave was not on display being taunted by a plush beaver wearing a war bonnet.

Indeed anthropologists today often earn their advanced degrees doing field work with arctic tribes where the hunting and gathering culture persists. Because of that, I am a bit suspicious of what anthropologists write about the fur trade. The material culture uncovered by anthropologists is germane to any historical discussion, but the analysis of anthropologists has to be evaluated carefully. A mutual dependence has grown between anthropologists and the Indians they study, and they both seek to encapsulate, not an episode in the past, but a way of life, with either scientific or mythological trappings. It's bad news for beavers if their slaughter is considered a timeless part of the identity of any segment of contemporary society, or any stake holder in writing the history of the fur trade.

So I benefited from visiting the museum. It reminded me of how important it is that we began to try to write a new history of the fur trade from the beavers' point of view.
Posted by Bob Arnebeck at 6:25 AM