What beavers meant to pre-contact Indians

On a cold winter day, well below freezing, with crusted snow in the woods and meadows and thick ice on the pond, I feel like I can go anywhere. For Indians, winter was never a time to hunker down and hide in a hole. And even when snow and ice conditions deteriorate humans with only two legs have a great advantage over larger animals with four legs. 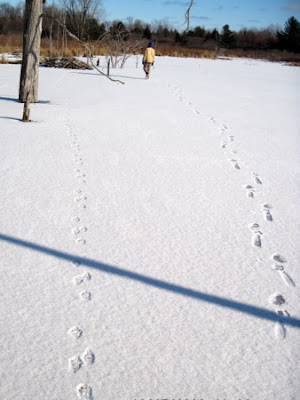 Before contact with Europeans, winter must have been solely a season for hunting large game and migration. The fur trade made winter the season for trapping because the thicker, darker winter fur was what the trade demanded.

I find that the easiest animals to see in the winter, even on the colder days, are deer and porcupines. Deer provided Indians with a generous portion of meat and their hide can be use for clothing, shelter, and drum heads. Porcupines were prized as food for Indians, and their quills were dyed and used to decorate clothing. (The patience Indian women had to do anything with quills mystifies me.)

Unlike the deer and porcupine, beavers do not spend every winter day foraging for food out in the open air. They cache food in the fall so that a goodly portion of it is covered by ice as their pond freezes. 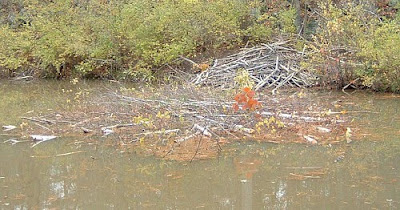 The beaver can go from lodge to cache under the ice to get food. Beavers also overeat in the fall so that they can sleep away the coldest winter days. However, eventually many beavers make a hole in the ice and, if the temperature is over 20F, they might come out to collect more trees and branches,

They sometimes sit on the ice of their pond complacently stripping and eating the bark that is their principal food. So hunting beaver in the winter requires a modicum of patience if you wait for the beaver to come out, or a good bit of hard work if you choose to force the beaver out of its lodge or pond.

Most beavers pack their lodges with mud in the fall and the mud freezes into a hard armor. Beavers did not learn to do this to thwart human hunters, but large canines like wolves and wolverines. By the way, while having two legs is an advantage going after deer, it's not that advantageous operating on ice, or if you fall through the ice. Finally even setting traps for beavers is not that easy since traps have to be checked periodically lest a coyote or fox steal the trapped animal. And remember, easy travel during winter gives you an itch to roam, and following deer might take you far from the swamps where beavers are confined.

By mid-January the ponds usually freeze hard enough to attract trappers. Before the advent of ATV's trappers probably headed to the ponds earlier, but no trapper now moves without an ATV.

Even though the fur trade was instrumental in the expulsion and near extermination of Indians, they still embrace the trapping of animals, especially the beaver, as a part of their heritage worthy of celebration. Since Indians have no recorded history in the European sense, their relationship with beavers before Europeans came is a matter of conjecture. Indians and the anthropologists who study them have embraced the Indian oral tradition as a valid description of the Indians understanding of nature. Although Indian legends don't pinpoint the Indians' use of beavers in the way a fur trader's manifest might, most people accept the special relationship between man and beaver that those legends suggest. To wit, the Indian and the beaver were brothers.

My working thesis is that before the fur trade, Indians had no special relationship with beavers and that the importance beavers and fur came to have for Indians arose because of the trade. The beaver hat became the fashion in Europe, so claiming a special relationship with beavers became the fashion among Indians. After all, as they traded fur for trinkets, they thought they were getting the better of the bargain. So a chief might relish a beaver robe not as an ancient accoutrement of honor but as the new symbol of wealth.

While most Europeans were primarily interested in the economic and political possibilities of the fur trade, Jesuit priests in Canada looked for contradictions in Indian customs that they could exploit in their crusade to convert Indians to Christianity. In the process, they described Indian behavior more to ridicule than to embellish an understanding of the Indian worldview. However, they managed to convert many Indians to Christianity and as they did, the strategic importance of the fur trade in that "holy" mission was clear to the Jesuits. So while they demonized Indian customs, they did not demonize the beaver and I think their observations on the relationship of Indians and beavers are reliable.

The Jesuits in Canada sent annual reports and frequent letters to their superiors in France that were then published to garner donations to the cause of converting the Indians. Father Paul le Jeune, mostly by virtue of his conviction that African slaves should be taught to read and write, has fared well in the pages of history. 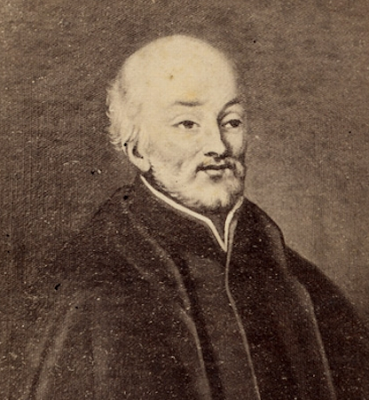 In 1634 he wrote extensively about his efforts to convert the Montagnais Indians who lived north of the lower reaches of the St. Lawrence River in Quebec. He wouldn't allow that the Indians had a religion, just a superstition. And he was amused at their prayers:

Their Religion, or rather their superstition, consists besides in praying; but O, my God, what prayers they make! In the morning, when the little children come out from their Cabins, they shout, Cacouakhi, Pakhais Amiscouakhi, Pakhais Mousouakhi, Pakhais, "Come, Porcupines; come, Beavers; come, Elk; " and this is all of their prayers. (The Jesuit Relations and Allied Documents Volume 6 CHAPTER IV. ON THE BELIEF, SUPERSTITIONS, AND ERRORS OF THE MONTAGNAIS SAVAGES Relation of what occurred in New France on the Great River St. Lawrence, in the year one thousand six hundred thirty-four)

How can we tell if Indian children made the same prayer in 1434? Can we analyze the prayer and argue that while an Indian child might come upon a porcupine or elk as it walked in nearby woods and fields, there was a far less likelihood of crossing paths with a beaver? So these children were, in a sense, praying for the trinkets beaver pelts bring, and that before the Europeans came beavers would be well down on the list of animals worth eating.
Posted by Bob Arnebeck at 4:25 AM