My Skin, Your Skin
A History of the Fur Trade as Informed
by Observations of Beavers
on and around Wellesly Island, New York
by Bob Arnebeck
“I sit here at my window like a priest of Isis, and observe the phenomena of three thousand years ago, yet unimpaired.” So Thoreau boasted at the beginning of his Journals. I revel in Thoreau’s timelessness, though not when he’s at his window showing off his Harvard education. I follow him more closely when he’s out in Concord’s swamps and woods, where the seasons not the ages rule. I hope his narrative of an August day in 1854 describing goldenrods and bees is much like what I write about them in my journal over 150 years later. 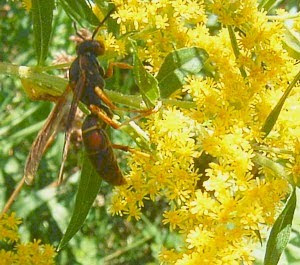 Of course, thanks to the fur trade, Thoreau never saw a beaver. History can be brutal to the timeless.

My study of beavers is a portal into any time, save the fur trading centuries. Perhaps I should be content with that, a recapitulation of beaver life before the slaughter began. I’ve seen colonies progress up and down creek valleys more or less unmolested. (I see evidence of coyotes taking individual beavers now and then.) Yet I think I am learning something important about beavers that suggests how they survived the fur trade, maybe not around Thoreau‘s Concord but perhaps where I am just a few hundred miles to the west in Jefferson County, New York. I can describe that only if I give the beavers I saw, not the aura of timelessness, but a detailed history to demonstrate their genius for survival. Then I must make that slice of history compelling enough to inform a larger history of the 400 year hunt bent on killing and skinning beavers in every watershed in North America primarily to make felt for hats in Europe, so that I can suggest that, against incredible odds, beavers fashioned their own survival.

This is a risky assertion because no animal advertises its presence more than beavers that build dams, 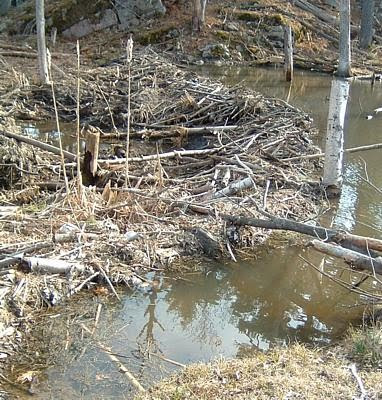 create ponds with lodges large enough to loom over the pond-scape, 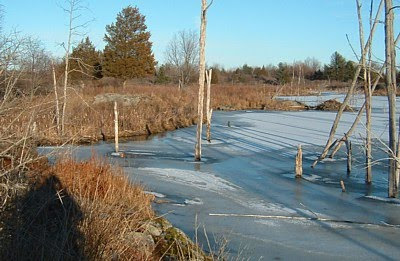 and cut trees many times larger than themselves. 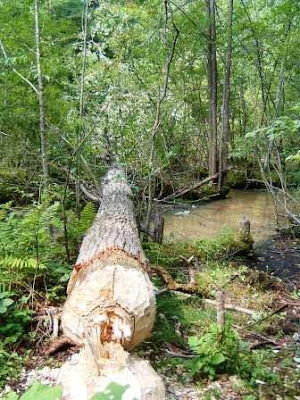 Beavers are easy to find, and to kill. In the latest monograph on the beaver, there is no suggestion that beavers had any survival skills that could thwart the fur trade. Indeed they died too easily. “The beaver trade declined rapidly when the stocks dwindled rapidly” Muller-Schwarze and Sun write, “after Sewell Newhouse invented the efficient steel trap in Oneida, New York, in 1823.“

The authors credit the beavers’ survival to the conservation movement. In New York’s Adirondack Mountains in 1900 there were said to be only fifteen beavers. In 1904, the state conservation agency released six Canadian beavers, and then a year later fourteen beavers from Yellowstone National Park, and eleven beavers were released elsewhere in the state. If that’s true then all beavers in New York State today are relatively close cousins, but I bet beavers survived the fur trade in the swamps near where I live. I’m going out on limb in saying that. An analysis of variations in the mitochondrial DNA of New York beavers might determine how severe the population bottleneck was in 1900, and how closely the beavers I see in Jefferson County now are related to beavers in Yellowstone.

But why shouldn’t I credit the conservation movement for saving beavers? I abhor killing wild animals and the conservation regime limits their destruction and protects their habitat. But that same movement ensconced in the state bureaucracy continues to manage beaver populations by promoting the trapping of beavers for recreation, heritage, extra income, and the fashion industry. The state’s conservation biologists have always had ready estimates of the beaver population to justify trapping. Twenty years after they “restored” beavers, trapping resumed. Now beavers are considered a nuisance and where I live the trapping season is as long as the market will bear, October 20 to March 30. Only the thicker, darker winter fur is marketable. That said, you can get a permit from the state and clear your land of beavers by any means at any time.

Conservation biologist count animals and protect their habitat only to sustain human exploitation of animals. In a pond I own close to a heavily trapped swamp, I observe refugees of the slaughter by ones and twos. They often appear catatonic and disoriented. In the spring of 2001, one slept on the bank of the pond for months like an earthquake victim afraid of an aftershock, not snug inside a burrow where it belongs. Earlier that year, walking on the winter ice of the swamp, I may have seen its last home, a large lodge. 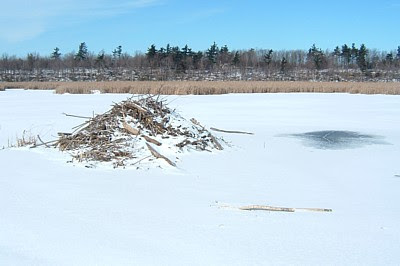 surrounded by three steel traps dangling underwater from sticks frozen in the ice. 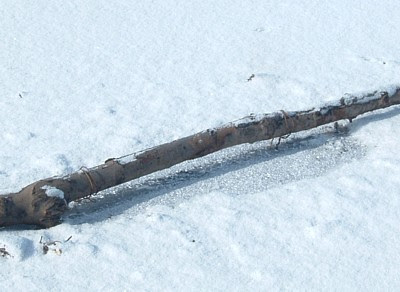 Of course, when I attack conservation management, I echo those trappers and hunters who insist that game does not have to be managed because the Lord will always provide them with sport. I don‘t want to support that belief by suggesting the beavers’ invincibility. But I think that the only way to bring about an absolute taboo against trapping beavers, and other fur bearers, is to reveal the community and family life of the animals, and their special relationship to the land. That in turn will help sanctify their habitat for their purposes, not ours. Many animals have a mystique to humans because of their size or beauty. I give you the resourcefulness of beavers against incredible odds.

Not that beavers are vermin. Vermin can enrage us with their resourcefulness. Beavers are too big to be compared to a roach or rat, and they don’t run and hide when confronted. The nobility of its character has been slapped into my psyche by the beavers’ magnificent tail.

The accepted wisdom is that when a threat appears, a beaver slaps the water with its tail as an alarm and other beavers take heed, and all the beavers seek the safety of their lodge. There is a scientific study showing that after 382 tail slaps by adult beavers, the response to 240 of those slaps was for the other beavers in the pond to hide. And isn’t that image of the cowering beaver bolstered by the romance of the fur trade? How could beavers not flee when faced with “Mountain Men” as they are hailed as in America, or “Caesars of the Wilderness” as they are laureled in Canada?

I haven’t counted the number of times I’ve seen a beaver slap the water with its tail, but to me it is clear that they are trying to scare me off, alarm me, not warn other beavers.

In 2008, in a large, open, man-made pond, enhanced by the beavers building up a low embankment, a beaver customarily slapped its tail at me every evening that I happened by. Often there was another beaver in the pond. That beaver seldom slapped its tail but it often looked over at me to see how I reacted to the tail slap just as I looked at it to see how it reacted. At first neither of us would react. But I always flinched first and walked away. The slapping beaver had warded off a perceived threat and defended its realm. I hope to the admiration of the beaver watching.

I always seem be around that 38% of the time when the scientist sees the suppose tail slap alarm unheeded, which bodes ill for this book. Science is comfortable with the averages it creates, but I can’t make the points I want to make with average beavers, only with the real ones I see. Still, despite my years of observing, to many my lack of scientific credentials diminishes, if not negates, the value of my observations, especially when I attribute untoward sagacity to the beavers.

At 5:11 pm on July 11, 2008, a yearling beaver sensed that I endangered the colony in a small, secluded pool lined with ferns and well shaded in a valley of hemlocks, maple, birch and elm. When it sensed me it jumped off a mound of grass where it was eating the leaves of a bush and swam back down a narrow channel to an adult near the lodge. I heard humming briefly. Then the yearling swam back up the channel by me and up and over a dam half fashioned with pine logs left by a farmer getting lumber over a decade ago. There was a smaller pool of water behind the dam where earlier another beaver had gone, swimming by me unaware of my presence. Shortly both beavers swam back down the narrow channel in front of me. The beaver sent to rescue the other was intercepted by the adult beaver by the lodge. The beaver that hadn’t noticed me evidently returned to the lower part of the pond using another channel that allowed it to avoid the adult beaver. There were no tail slaps. You might have to view the video below a couple of times to get a sense of what is going on. I love it because it shows the the beavers' sensitivity to their environment and the welfare of their family.